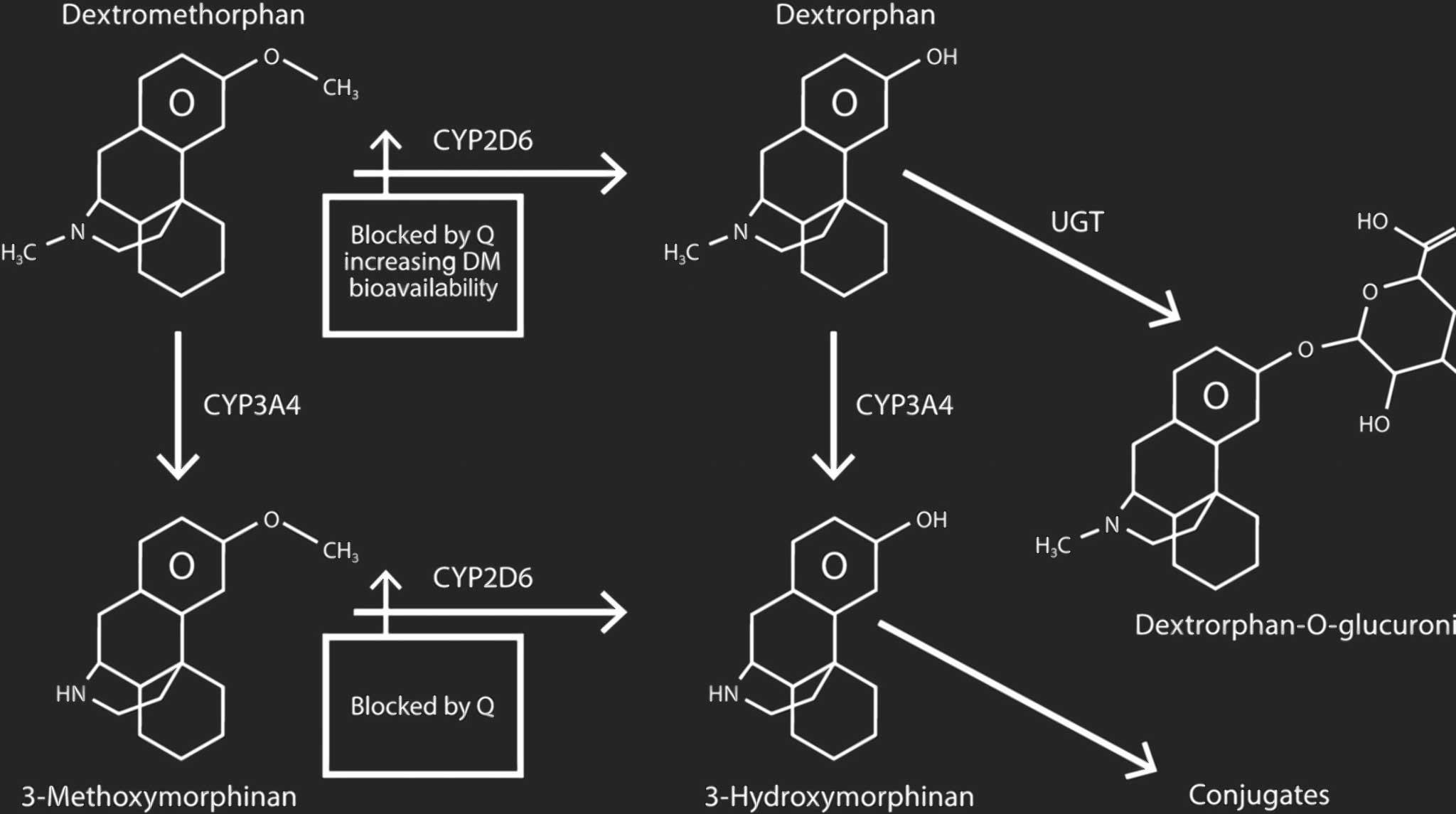 December 23rd, 2019: After being on DXM/Q for the past 2 years I have updated this page with any bumps along the road, and any golden nuggets I learned over these two years.

January 31st, 2018:  This page will be focusing on my journey with the cutting-edge experimental combination of non-prescription drug Dextromethorphan and prescription drug Quinidine for treatment-resistant neuropathic pain and central sensitization syndromes (including Fibromyalgia). This page will be written for the general public on my experiences with DXM/Q over the next month or so. As a philosophy of mind scholar, I will also be publishing a formal paper on Academia.edu, and I will be posting a link to that paper here for physicians and clinical researchers. This a purely self-guided study on my part (that’s right, I’m playing the part of the patient, doctor, researcher, and pharmacologist here) with the assistance of my exceptionally supportive neurologist, whom is prescribing the quinidine. My blood pressure has been monitored throughout this process by my in-home physical therapist, and my first EKG came back normal. I use my own oximeter to measure my heart-rate.

For those interested in pursuing this combination of medications for central sensitization syndromes, please ask for a referral to a neurologist or chronic pain specialist and print off this page to take with you to your appointment. Dosages will vary per patient.

The dose for quinidine is approximately 4.5 times the dose of dextromethorphan within the first month. For the first month, the patient should take one dose in the morning and one dose before bed. Recommended 15mg increase of DXM per 1-2 weeks. After one month, only one dose may be required in the morning and the quinidine may be reduced to 4x the amount of dextromethorphan. Increasing beyond the 45/200mg at the 4.5x, for me at least, seems to lead to the quinidine side effects of increase muscle and joint pain.

UPDATE: 08.04.2020: Lots of huge news on this front to report. In March I was put on Dantrolene to replace the Amrix as a means to avoid the cognitive issues being caused by the Amrix. While it did help, it also was too side-effect rich for me to handle and severe dehydration plus and IBD event landed me in the ER. However, my myofascial pain and tightness completely ceased and has yet to come back. Even my physical therapist could feel a profound physical difference in my fascia. Because of this reduction in tightness and pain, I was able to reduce to 5mg cyclobenzaprine per day (though this may not be a long term possibility). Noticeable cognitive improvements were had by this change. Shortly after, my insurance stopped covering Quinidine Sulfate 300mg and I had to switch to Quinidine Gluconate 324mg extended-release. I knew that chemically this form would hinder at least some of the NMDA antagonistic effects of the DXM/Q, but I gave it a try. I went from having to take 300mg of Quinidine Sulfate to only 60mg Quinidine Gluconate without side effects, meaning there are fewer antimuscarinic effects leading to cognitive issues due to this medication. This means I ‘may’ be able to go up on my cyclobenzaprine a little bit if need be with less cognitive issues. I did have to go up on the DXM to account for the gluconate NDMA agonist effects by 15mg. I am however still looking at alternatives to muscle relaxors with my recent whole-genome genetic testing as my guiding light.

UPDATE: 12.23.19: After being on DXM/Q for two years I have learned a lot about what interacts with it. Depending on the metabolism of the patient, not only can many types of supplements counteract the delicate synergy of DXM/Q, but also foods and beverages. There are MANY foods and beverages that inhibit the CYP3A4 enzyme that have noticeable effects on the DXM/Q potency. The CYP3A4 enzyme is responsible for the analgesic effect, and therefore, any inhibition will directly decrease the analgesic effect of the DXM/Q.  DXM/Q is best taken with plain water, with no other foods or beverages. Foods and beverages such as grapefruit juice, orange juice, berries, peppers, grapes, wine, milk, peanuts, soy, kale, onions, chocolate, etc. are all CYP3A4 inhibitors, and depending on the patients enzyme levels, can drastically reduce the effectiveness of DXM/Q when taken with meds, and even when consumed later in the day. I have had to eliminate or minimize these foods and beverages in my diet and make sure they are not ingested until at least 1 hour after my morning dose or ingested in very small amounts.  Every CYP3A4 inducing supplement seems to also induce CYP2D6, and all other CYP2D6 inhibitors appear to also inhibit CYP3A4. If there is a natural alternative to quinine/quinidine, I certainly have not found it.

UPDATE: 06.11.18: Magnesium Taurate does seem to reduce the potency of the DXM/Q analgesic effect, possibly because DXM binds with higher affinity to the phencyclidine receptor in the absence of magnesium. (1) It also slows metabolism, whereby delaying the analgesic effect. I will be taking my supplements 2 hours after I take my DXM/Q dose from now on.

UPDATE: 05.04.18: Added magnesium glycinate thinking the glycinate would not be enough to counteract the DXM. While the analgesic effect was not entirely counteracted, there was a noticeable reduction in pain relief. I switched from cyclobenzaprine 10mg to Amrix 15mg (extended-release cyclobenzaprine) in hopes to reduce brain fog, but the jury is still out on that one. DXM was reduced to 60mg from 75mg due to accumulated muscle tension increasing pain. Since the magnesium glycinate is out of the picture, increasing the Amrix may be the next step.

UPDATE: 04.12.18: Magnesium and tizanidine are not enough to counteract the long term muscle tension side effects of DXM. Switching back to low dose (2.5mg) cyclobenzaprine resolves these side effects with a much longer half life without increasing the potency of the DXM.

UPDATE: 02.26.18: The DXM/Q seems to have successfully treated my Meniere’s disease. No vertigo or nausea at all.Also, increasing quinidine by at least 50mg decreases excessive yawning and related symptoms.

UPDATE: 02.19.18: I may be able to use other medications to increase the pain reliving effects of the DXM/Q without increasing those drugs specifically (example: the guaifenesin increases those effects but negatively impacts my muscle weakness, jaw clenching, excessive yawing, so other medications may increase the effects without these side effects, also any medication/supplement that increases the CYP3A4 enzymes may increase the analgesic effects). So, there are still options to take this further, but for now, my efforts will be on clearing up the brain fog caused by the anticholinergic effects.

UPDATE: 02.06.18: The guaifenesin addition appears to be leading to an increase in serotonin, whereby increasing the side effects of jaw clenching, excessive yawning, and teeth chattering. I will be removing the guaifenesin and readjusting the dextromethorphan and quinidine.

UPDATE: 02.04.18: Since coming off my flexeril 10mg at bedtime which increases the strength of DXM, I am re-establishing the DXM/Q balance. Since I am currently getting over the flu, it’s hard to do as of right now. But, the current amounts are 30mg, 20/400mg, 200mg.

Quantitative Approach – I found that the balance of dextromethorphan and quinidine was strongly correlated with heart rate. Using a standard oximeter, I noticed that increased heart-rate was always present when the dextromethorphan side effects were still noticeable. However, heart-rate was normalized when the correct dosage was obtained. This normalization of heart-rate was measurable approximately 15 minutes after the dose was taken.

Qualitative Approach – Closed-eye visual hallucinations at bedtime should be no stronger in quality than visual noise (specs of light). Moving auras or abstract designs suggest an increase of at least 50mg of quinidine may be required. Complex geometric hallucinations suggest upwards of 100mg of quinidine may be required. When the dextromethorphan dose is too high during the day, patients may describe visual hallucinations such as objects appearing more rounded than usual, some loss of color vividity,  and some loss of depth perception. Also, tunnel vision, apathy, zoning out, mind blanking, and a slightly altered perception of time may be reported. When the proper therapeutic dose is reached, the patient may use the word “comfortable” to describe the way they feel at rest. Dosage may need to be increased to reach comfort levels not at rest.

Initial pain may be increased over the course of several days for those who are sensitive to medications with vasodilation properties. The pain will be noticeable after the first dose begins to wear off. The vessels will adapt to this dilatation within about three days.

SSRIs such as fluoxetine (prozac) should not be taken with DXM/Q unless the dose is very, very low. Caution should be used with using DXM/Q and MAOIs.

Guaifenesin increases serotonin, whereby increasing the side effects of jaw clenching, excessive yawning, and teeth chattering. It may also increase the startle response at night, reducing sleep quality, whereby leading to muscle weakness and fatigue during the day. L-theanine and caffeine increase the jaw clenching side effects, though magnesium supplements do seem to partially counter this effect.

Magnesium supplements in general seem to either reduce DXM/Q effects or delay metabolism. They should be avoided until at least 30 min – 1 hour after DXM/Q is taken.

At high dosages, dextromethorphan can have laxative effects. To reduce discomfort, those taking DXM/Q should avoid taking other medications or supplements that are known to also cause diarrhea.

(1) Tricyclic antidepressants and dextromethorphan bind with higher affinity to the phencyclidine receptor in the absence of magnesium and L-glutamate.